Difference between revisions of "Back-2-Back Drawing" 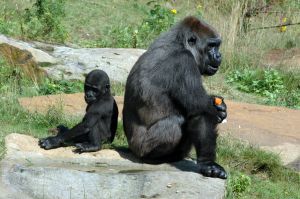 The individual with the template has to get her partner to draw an exact duplicate of the shape on her sheet, using only verbal directions.

After they are done, the partners compare the provided shape with what was drawn.

To each pair, you can add one person to be the observer. After one round, change roles.

Have the group perform the activity more than once, with different templates.

Allow each pair to sit face-to-face. The "direction giver" is not allowed to speak nor to show the template; she must get the drawer to recreate the template using only visual cues.

Prepare two illustrations that are the same except for seven minor differences. For example, one shows a man with a moustache, in the other picture, that person does not have a moustache. One picture shows a bee above a flower. In the other picture, the flower is there without the bee. Divide the group into pairs. Each pair sits back-to-back. Give each person in each pair a different of the picture. Each person is allowed to see only their own version. Each pair works together to discover the differences between their versions. They work on this by each one describing their picture to their partner. [Teampedia thanks John Donovan for clarifying this version of the activity.]

Can you help make this activity better? Do you know an alternate way to lead this activity? Click "edit" above and help improve this site for everyone!
Retrieved from "https://www.teampedia.net/wiki/index.php?title=Back-2-Back_Drawing&oldid=121635"
Categories: